This is a school work.

Anyone who tried to type SMS on the tiny
keyboard of his handy will be very interested in this brand new device that
makes sending a SMS as easy as writing on a paper. 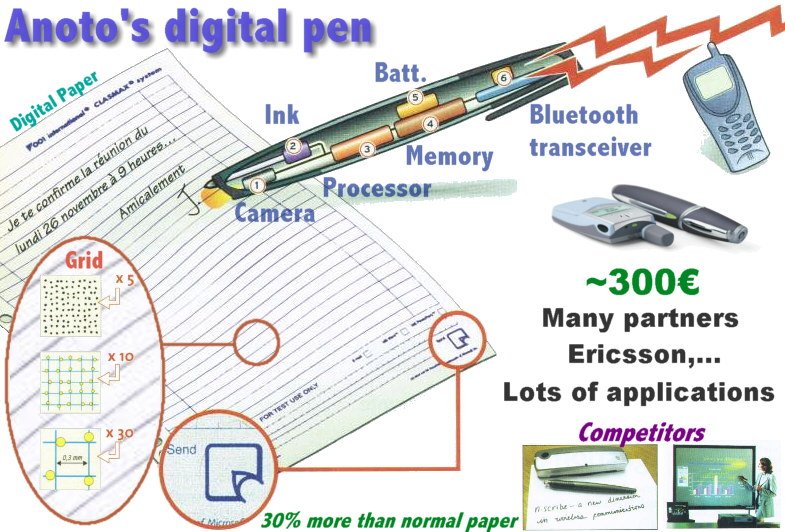 What is this new device?

Anoto is a new technology that will digitalize what you are writing with the pen and send it to your preferred device, handy, PDA or PC… The name Anoto is derived from the Latin word “Annito” which could be translated by “I take notes”, and that is perfectly the goal of this new device.

Imagine this: you are writing a letter on a piece of paper with what seems to be a normal pen. But when you have finished scribbling, you just have to enter the address of your correspondent in a special field of the paper, and tick a special box to send the message. Your pen will send the message you wrote to your handy by Bluetooth, and your handy will send your message exactly as if you spent painfully hours to type it on the tiny keyboard of your mobile phone. That is exactly the aim of Anoto’s patented technology.

Basically, this special paper looks exactly as a normal paper. But this paper is fitted with a special pattern invisible to the human eye, but to the pen. This pattern is a collection of dots, arranged in a such way that with viewing only a very tiny part of the sheet, you can exactly point out where this part is located in the sheet. With this technique you can so locate the pen and its way on the sheet.

As the pen really physically writes on the paper, the paper is not reusable. But the good point is that this paper is not expansive: it is just 30% more expansive as a normal paper. You can so treat this paper as usual, and take as many sheets as you want.

First of all, this pen is a normal pen, with ink. The ink used is invisible to the camera of the pen. So writing will not destroy the pattern of the paper.

Just below the ink tank is located a small camera, that takes hundred snapshots per second of the pattern of the paper below the pen. With this information, a processor calculates the X-Y coordinates of the pen, and store the path in the embedded memory. In addition, the processor has Optical Recognition Character capabilities, to convert theses curves into characters. The memory is designed to be able to memorize up to 40 sheets.

When the writing is finished, the contents of the memory are sent to the selected device by an embedded Bluetooth transceiver. Anoto’s pen can communicate with any Bluetooth device: (future) handys, PDAs, PCs… This transmission can be secured by the use of PKI techniques.

This pen should weight 45 grams and be at sale at the price of 300 euros.

The market possibilities open to this new device are numerous. It can be used in every case a capture or pointing device is used: obviously it can replace a keyboard, but also a drawing table, and a mouse. The use of Bluetooth will allow its use with any new device handy, PDA, PC, TV,…

Anoto has thought to numerous cases of uses. Here are the more relevant:

Within a year or two, the price could fall to less than 100 euros, which would put this useful device at an affordable price for a common use. The size of the pen should be reduced too.

Anoto is not the only one to have understood that people needed something else than a keyboard, and have competitors. Other technologies have been developed, like a tactile board, or another pen. But none have the same level of integration with other devices and are so user friendly.

This new device has every thing a breakthrough can imagine: technical success, a good marketing team, partnerships, and a wide free market… If the price and the size are reduced as expected, this technology cannot be less than a great success.